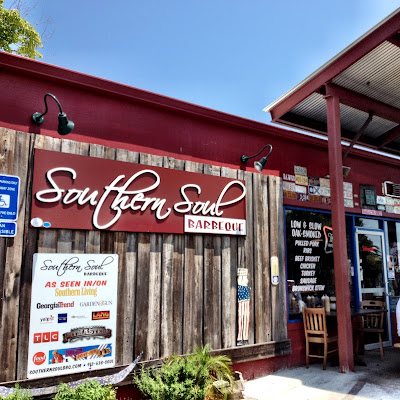 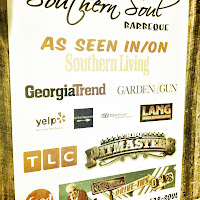 Unvisited Georgia BBQ destination number one...Southern Soul Barbeque in St. Simons Island. Considered one of the state's BBQ heavyweights, I couldn't make the trip here soon enough. Memorial Day weekend seemed like an appropriate time to pay owners Harrison Sapp, Griffin "Griff" Bufkin, and the rest of the SS crew a visit. They're becoming a big name in the BBQ world, but even still, I try not to get my hopes up too much as it can sometimes unfairly diminish some of the food experience. I never got the chance to visit the original location which unfortunately burned down in a fire back in 2011. There were no visible signs that I could see of the fire that occurred just a year before. It's nice to see a place like this make a full recovery from something like that.

Southern Soul owners, Harrison and Griffin, are often visible and play very active roles in the success of this restaurant. I only saw Griffin during our brief visit. If he wasn't helping expedite orders, he was mingling with locals or grabbing t-shirts for tourists like me. From what I've heard, Harrison's got BBQ in his blood being a third generation "smoker." Griff's been cooking up Brunswick stew at this same location even back when it was called Frannie's over ten years ago. While it's hard work, I get the feeling that these guys love what they do. 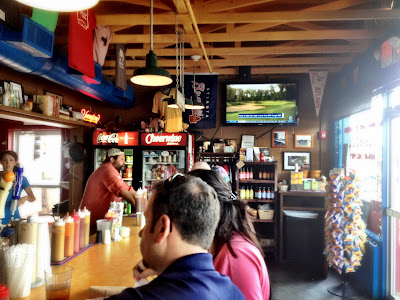 There was a group of six of us that showed up on Saturday afternoon to this old fill station turned young-famous BBQ house. Smoke was in the air on this hot 93 degree day. The all-wood, oak fueled Lang smoker out front was running at full strength. Southern Soul has a very authentic BBQ vibe. There's no ridiculous decor that tries to fake you into thinking you're going to get some good food. Even though the spot that we visited has only been around for about a year, it feels real. It feels like it belongs in the area. 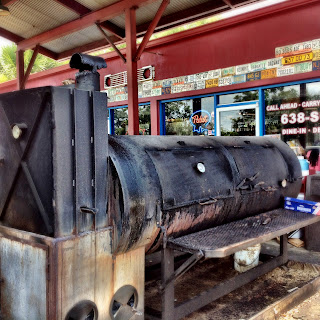 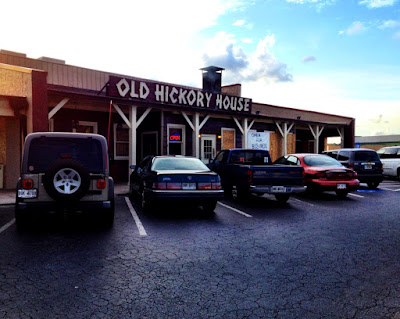 Old Hickory House is no stranger to the Georgia BBQ landscape. Being part of Atlanta's BBQ scene for almost sixty years, it's become a favorite spot to many including 39th President of the United States, Jimmy Carter. Loving Old Hickory House so much, he had it flown to Washington D.C. during his term on at least one occasion. Places like these have history...they have regulars...but do they have above average food? 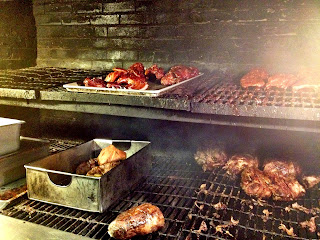 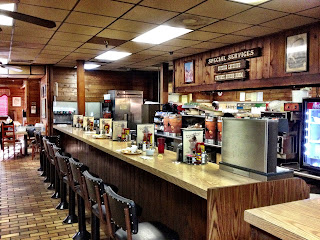 The GBH team (with the addition of Jamie's grandparents, Betty and Leland) headed over to the Old Hickory House in Tucker on a Tuesday night. They're currently under construction due to an errant car that managed to slam right through the front of the restaurant, but they're still open for business. The dim lit interior's got an old log cabin type feel (imagine that!). We did notice the hickory-fueled open pit at the entrance behind the counter. The gentleman working the counter assured me that all of the meat is cooked 100% on their open pit. I was quite impressed as I looked over the ribs, chicken, and pork butts. The typical crowd here was a little older, probably coming here for decades. 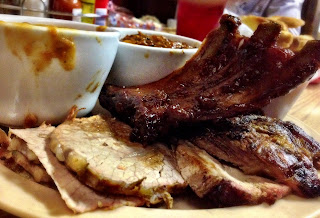 We sat at a large booth in the corner, looked over the old plastic covered menus, and finally ordered when our waitress came. They have a platter called the "People Pleaser" that included sliced pork, beef, and ribs. I'm a person...I like to be pleased. Easy decision. Jamie went with the chicken plate so we could get a good feel for everything they have to offer. There's no shortage of vegetable/side options here. I wouldn't ever recommend a BBQ place based solely on their sides, but I think it does say something great if you've got great meats AND sides. 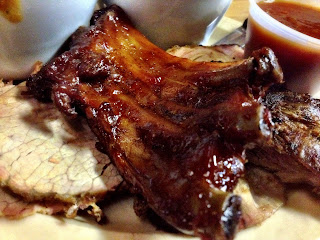 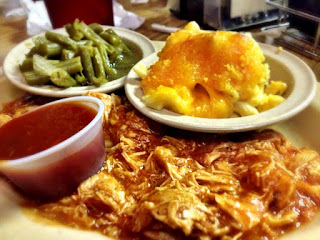 After eating a lot of BBQ, you can usually make a pretty fair assessment of food as soon as you see it. The easiest to spot is, of course, how dry/moist it is. I was let down that the beef wasn't brisket, but instead a dry, tough, grey top round roast. The pork was also just as boring and dry. All meats had smoky flavor, but that just might be the only positive note. The ribs were also dried out and covered in a sweet glaze that didn't help out much. The chicken plate was not good...at all. Resembling more of a soup/stew, this chicken had no redeeming quality and was actually sent back and taken off of our bill. The Brunswick stew and pit beans kept our bellies full before we left, but are in no way alone worth the trip.

I appreciate the longevity of this BBQ joint and respect them cooking everything on an open pit.  We didn't have a great experience with the food though and don't plan on going back anytime soon with the amount of BBQ spots left to try...onward!

Email ThisBlogThis!Share to TwitterShare to FacebookShare to Pinterest
Labels: Tucker 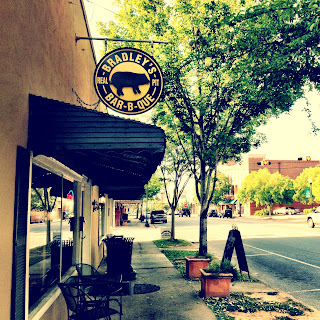 Allured by the advertising of "Real Pit BBQ" was enough for me to stop at this BBQ joint located just off the square in downtown Covington, GA. I'll go ahead and alleviate any curiosity by explaining that the real pit was a Southern Pride "gasser." Some great things can be done with these contraptions as evident with Fox Brothers, Community Q, Grand Champion, and others. As one reader said though, "Don't ever let your gas bill be more than your wood bill." While somewhat unrealistic, I thought that was some pretty sound advice for any new BBQ venture. 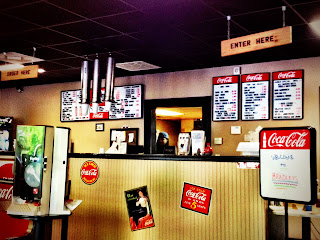 I arrived at 7:30 on a Wednesday night. I double-checked their closing time to make sure I wasn't late (it's 8:30) because staff members were already cleaning and starting to close up. Needless to say it wasn't busy at all. I appreciated the case of Monster Energy Drinks being displayed at the front counter since sometimes those might be the only things that get me through the long drives. Pulled pork, two meaty spare ribs, coleslaw, and "Bradley's Beans" would be paired with a side of smoked chicken wings. 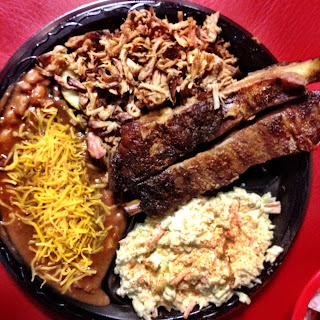 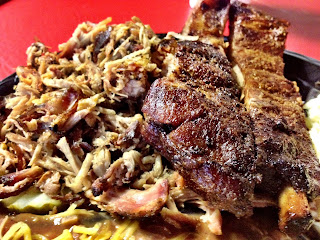 The pork and ribs were both seasoned well. I've found a lot of BBQ joints not seasoning their meat enough. Either they think that the smoke is adequate flavor or they're just scared to over season. Don't be scared to over season large cuts of meat. With that being said, the pork was extremely dry. It reminded me a lot of Cowboy's BBQ which is not far down the road (this isn't a good thing). The ribs were average. My favorite part of the meal were these hickory smoked wings. Strong smoke flavor and nice texture easily made these wings the star of my meal. I ordered six but could've easily eaten ten more, in large part due to how boring the rest of the meal was. 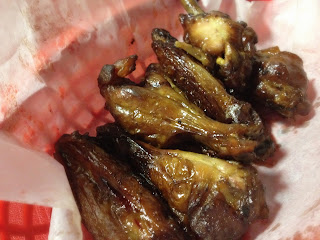 The coleslaw was not anything special, but I should definitely mention something about "Bradley's Beans." Tasting eerily similar to refried beans at your closest Mexican dive, these beans are topped with cheese and somehow have found their way onto this BBQ menu. I'm not sure what the reason is behind it, but they're available if you're into refried beans with smoked wings.

I left Bradley's still wishing for great BBQ off of a nice open pit. I had to settle for some smoked wings instead. My best advice would be to not get your hopes up too high if ever visiting and not straying too far from the hickory smoked wings. Jim 'N Nick's in nearby Conyers is a better alternative at this point.
Posted by Dustin at 5:36 AM 1 comment:

Email ThisBlogThis!Share to TwitterShare to FacebookShare to Pinterest
Labels: Covington 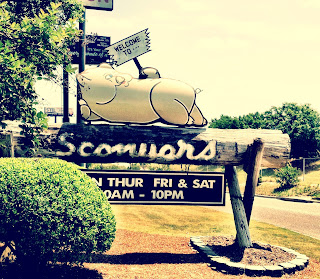 I've been wanting to try Sconyers Bar-B-Que in Augusta, GA for quite some time now. They have limited hours being only open Thursday-Saturday which has caused me to miss them a number of times while driving through. However, this past week's timing was finally on my side. There was a time in the 1980's when Sconyers was even mentioned in the same sentences as some as the nation's top BBQ spots. People Magazine (not greatly known for BBQ information) did a piece in 1989 which ranked them as one of the top ten BBQ destinations in the nation. You can read the full article here. 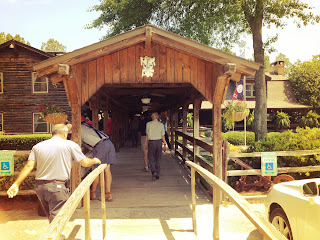 When you pull into the gravel parking lot it's hard not to think that you're visiting some kind of BBQ theme park. The scene here tries to take you back to the 1800's during the plantation era. Old farming equipment lines the covered walkway as you pass the fish ponds. Once in the main door, you're greeted by women wearing bonnets and Southern 1800'esue clothing. I found this extremely odd. I just wanted some good food. I've seen at numerous BBQ establishments that if they can get the customers to THINK that the BBQ is the real deal before they eat it, then they have no choice but to agree. This is evident with all of the fake open pits out there, "Best BBQ in the World!" claims, and in this case, faux-Southern garb and props. It's not a bad business strategy, and I don't blame them...just try not to get fooled.
See the Food...
Posted by Dustin at 5:16 AM 5 comments: 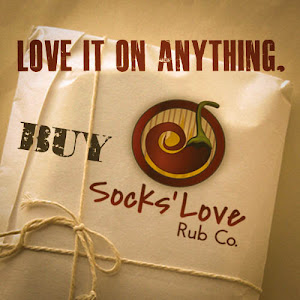